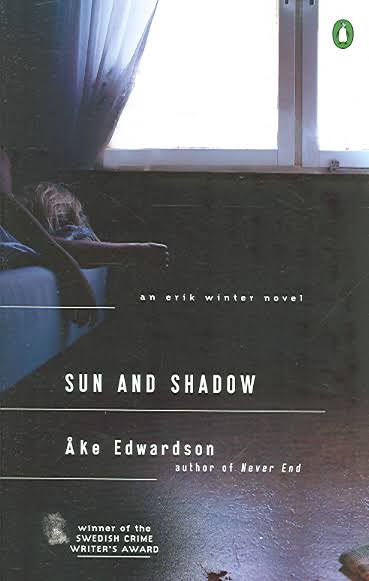 Sun and Shadow, the first Detective Erik Winter novel by Swedish writer Ake Edwardson to be translated into English (1999), is a dark psychological mystery that chronicles two grotesque double murders and the exhausting investigation that follows. The plot is complex, and it delivers the build-up to a suspenseful ending.  (See review of The Preacher, by Sander Jaboksen)

Edwardson’s style is literary. The writing is strong, especially the descriptive language and the dialogue. After Detective Winter visits his father, who has just had a heart attack and with whom Winter has had a strained relationship, he tells his lover, Angela, about it:

“As if we’d been chatting only last week.”

“Depends what you mean. We spoke about safe subjects.”

“Everything takes time. He has to get better first.”

“Not so tired that I can’t indulge in a glass of duty-free whiskey. What about you?”

These spare conversations, circling around a subject like a dance, are common. In effect, dialogue carries the narrative.

Edwardson avoids extensive descriptive passages that tend to slow the narrative movement. Yet often the descriptive language is strong. Here is an example of a strong and spare description:

“It was night in the apartment, no lights burning anymore. A standard lamp had been on all day, but the bulb had gone. As dawn broke, autumn sidled in through the venetian blinds and a roller blind in the bedroom let in patches of light.”

I would quibble with a couple of things (pet peeves of mine) in Edwardson’s style. (I should add here that it’s entirely possible that the first of these problems results from translation and may not exist in the original.)

First, Edwardson works the poor, overused verb “to be” to within an inch of its life, both as the main verb in a sentence and as the helping verb used with a main verb in the “–ing” (progressive) form. I’ll italicize examples in the following short paragraph to demonstrate:

“Winter was walking along the Ricardo Soriano. It was evening again. He went into the cerveceria Monte Carlo and ordered a glass of draft beer at the bar. The place was full of men watching a football match on a large screen. Real Madrid versus Valladolid. He drank his beer and felt comfortable among all the shouting. There were no women inside the bar. They were sitting at tables on the pavement outside, waiting for the match to end and the evening to begin.”

Five “to be” verbs in a short paragraph. The problem: All these “to be” verbs kill the immediacy of the reader’s experience of what happens. Compare the following possibilities: “Winter walked along  . . . “ or “The bar overflowed with men watching . .” or “All the women sat at tables on the pavement outside . . .” Revising “to be” verbs into action verbs is a staple of good writing.

My second quibble: Edwardson tends to filter sense experience instead of giving it to the reader directly. Here’s what I mean. Detective Winter goes into a bar, and the narrator tells us: “Winter could hear people speaking Norwegian, Swedish, and German.” The readers should experience the bar, not have Winter experience it for them. It would be easy to revise this passage to say, “People at the tables around him spoke Norwegian, Swedish, and German.” That way the reader experiences the polyglot with Winter instead of being told that Winter experienced it. This kind of filtering is too common in the novel.

Okay, with all that said, this book was a good read. I recommend it, especially for fans of Scandinavian crime fiction. It’s a strong example of the genre. The complex plot builds slowly and in the end delivers a powerful, driving finish.

One thought on “Review: Sun and Shadow, by Ake Edwardson”